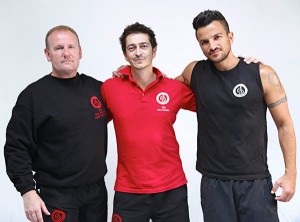 With over 35 years of combined experience in the martial arts coaching industry, Paul and Alan are committed to passing on everything they know about running a kids’ martial art school, from the business and financial aspects, all the way to creative ways to deliver a lesson.

Pete, an avid Kung Fu student, has been amazed by the positive change in his two children, Princess and Junior, since they followed in his footsteps and started Kung Fu lessons. The improvements he has witnessed in their confidence, discipline, focus, and general behaviour has convinced him that every child needs to learn Kung Fu.

So convinced, in fact, that he has joined forces with Paul and Alan as a shareholder in Kung Fu Schools. As spokesperson, Pete will use his celebrity status to promote Kung Fu Schools in the media.“The change in my little boy is amazing; he’s a beautiful young man who has respect for others” – Charlotte, Mum of Mac, 8

Officially endorsed by the Chinese government, Kung Fu Schools is proud to be the only martial arts organisation outside of China to be designated a “Confucius Classroom”, recognising us as a centre for excellence in teaching Chinese art and culture.

With close ties to the Confucius Institute, the cultural arm of the Chinese government, we frequently host visiting coaches from China, instructing them how to teach the art to a Western audience.

Joining the Kung Fu Schools franchise will be like becoming part of one big family. The sense of camaraderie among franchisees and with our head office means that it is always easy to ask someone for help or advice. And with our franchisees coming from a wide range of different backgrounds, there is tons of professional experience to draw on, from business administration, marketing, and IT, all the way to health and safety guidelines and teaching strategies.

You can find out more about which cookies we are using or switch them off in settings.

This website uses cookies so that we can provide you with the best user experience possible. Cookie information is stored in your browser and performs functions such as recognising you when you return to our website and helping our team to understand which sections of the website you find most interesting and useful.

Strictly Necessary Cookie should be enabled at all times so that we can save your preferences for cookie settings.

If you disable this cookie, we will not be able to save your preferences. This means that every time you visit this website you will need to enable or disable cookies again.

This website uses Google Analytics to collect anonymous information such as the number of visitors to the site, and the most popular pages.

Please enable Strictly Necessary Cookies first so that we can save your preferences!

Please enable Strictly Necessary Cookies first so that we can save your preferences!